Since 1979, we have been
stealing the hearts of ice cream
lovers in Annapolis. 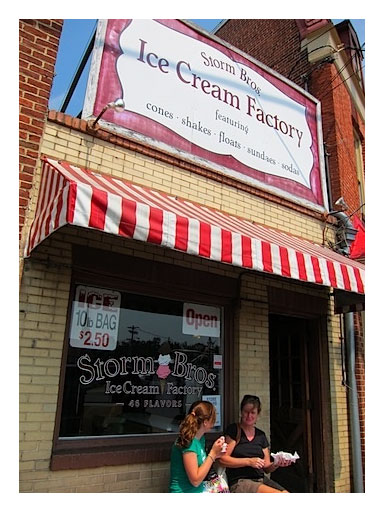 Brothers Thomas and Sveinn Storm started their careers while still in high school by successfully managing an Annapolis ice cream store. After graduation, they attempted to purchase the business but were denied by the franchise due to their age.  At the ages of 19 and 20, they sought out someone who would give them the opportunity to be in business for themselves. On a handshake and a promise, Robert H. Campbell, the auctioneer, agreed to rent 130 Dock Street to the boys, and Storm Bros. Ice Cream Factory became a reality. The store is now in its 45th year.

From the beginning Storm Bros. has provided a top quality product at “neighborhood prices”, not typical tourist prices. This has helped to make Storm Bros. a popular destination for Annapolitans and visitors alike. We strive to provide an excellent work environment for many young people and are delighted to give our support to local schools, neighborhoods, and the arts.

In September of 2003, our business was virtually destroyed by the record-setting flood caused by hurricane Isabel. Within hours of the waters receding, we were again flooded but this time with offers to help us rebuild. In the days and weeks to follow we received an outpouring of encouraging letters and phone calls from all over the country. Due to the efforts of so many people, we reopened in thirteen days.